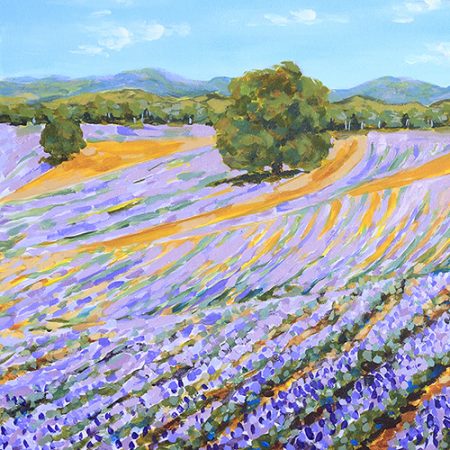 I’m thrilled to be participating in the Arts Connect Inc members’ exhibition at The Old Ambulance Station in Nambour. Members were asked to create works on the theme of Truth, Healing and Prophecy, depicting through art just how art has influenced their life, journey, art, healing, to mention a few suggestions.

In this painting, Lavender Pathways, I share the background to the new direction that my art practice took in 2005.

In 1994 I had graduated with a Bachelor of Visual Arts in Fine Art from Queensland College of Art (QCA) Griffith University, majoring in Intermedia in which I explored non-verbal Artist’s Books and video-art. Those projects would eventually show me a new pathway for my art practice.

While working in Aged Care I often asked other nurses why nobody creates books and films specifically designed for people with dementia. With encouragement from the Director of Care I completed a psychology degree, and continued working in Dementia Specific Areas, always hoping to learn enough to create the communication media of my dreams. In 2002 I suffered workplace injuries while working in Aged Care.

The following year I rediscovered lavender, therapeutic lavender liniments and relaxing scents while visiting Lavender farms in Tasmania and Victoria. In 2004, after two years of Work Cover support and treatments, I was considered physically unable to return to caring and diversional therapy duties, a demoralising experience.

However, it forced me to choose between feeling useless at fifty-six years of age or to pursue a new direction and design the communication tools I had in my mind. I returned to QCA to complete a Master of Arts in Visual Arts. I was unable to carry my books or camera equipment and relied on a trolley, awful for my pride but at least it gave me independence. It was an intense year to learn the new digital media for photography and video, research Alzheimer’s disease, and non-verbal communication, and conduct surveys with clients in care. In 2005 I received a Griffith Award for Academic Excellence. The following year I completed an honours degree. My new pathway led to my new career. An avenue to use my art and photography to support carers and patients.

I will always be grateful to my family and friends who supported me during the early days of injury and assisted me through my establishing a new career with their encouragement and assisting with props, travel, starring in movie productions, books and games.

Hope you can pop along – 28 ACI artists are exhibiting.

Other Blogs about this exhibition